Probiotics are live microbial food supplements. The most famous ones are the lactic acid bacteria and the bifidobacteria used in the production of yogurt and other dairy foods.

These organisms are not pathogenic and are non-toxic, they retain their viability during storage and survive while passing through the stomach and the small intestine. Probiotics can be used for the prevention of diarrhea and improve the symptoms of lactose intolerance.

The three most useful and most commonly used types of probiotics are: 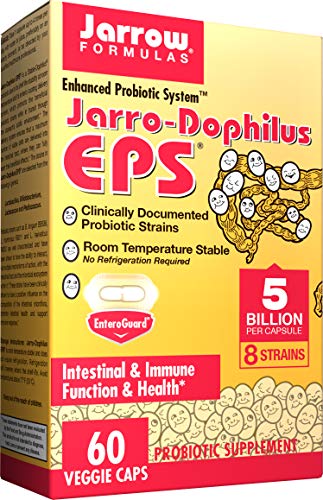 Jarro-Dophilus EPS® is really the leading probiotic supplement on the market today. This is a stable Dophilus® probiotic formula with guaranteed storage stability at room temperature and patented delivery system with an enteric coating, which effectively protects the beneficial probiotic strains while transiting through the stomach acid.

The delivery system ensures that a maximum number of viable cells reach the gastrointestinal tract where they can fully exercise their beneficial effects. The strains in Jarro - Dophilus EPS® are selected from the following 4 genera: Lactobacillus, Bifidobacterium, Lactococcus, and Pediococcus.

The patented EnteroGuard® coating maximizes the survival of the probiotic bacteria in the intestine and thus repeatedly increases their efficiency. Each capsule guarantees 5 billion viable cells at the recommended storage conditions and throughout the shelf life.

1 capsule up to 4 times a day with water or juice, preferably on an empty stomach, or as directed by your qualified health care professional. 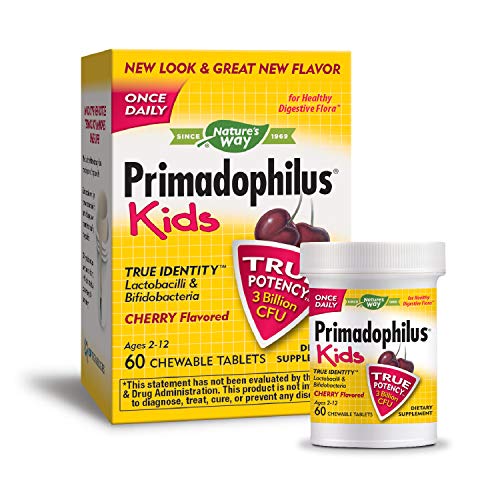 Primadophilus Kids: a Special Formula for Your Kids

It helps normalize the functions of the gastrointestinal tract and creates a healthy digestive flora.

How This Product Will Help Your Child Healthy Gut

Probiotics are live microbial food supplements. Most famous are the lactic acid bacteria and the bifidobacteria used in the production of yogurt and other dairy products.

These organisms are not pathogenic and are non-toxic; they retain their viability during storage and survive through the stomach and small intestine. Probiotics can be used for the prevention of diarrhea and the improving of the symptoms of lactose intolerance.

They improve the digestibility of dairy products and other proteins; they stimulate the absorption of lactose in people who are unable to assimilate it; they promote the overall digestion and suppress the excessive multiplication of "bad" pathogenic microorganisms in the digestive system.

They also suppress the putrefactive processes in the stomach and intestines; they prevent the lack of B vitamins and many others. 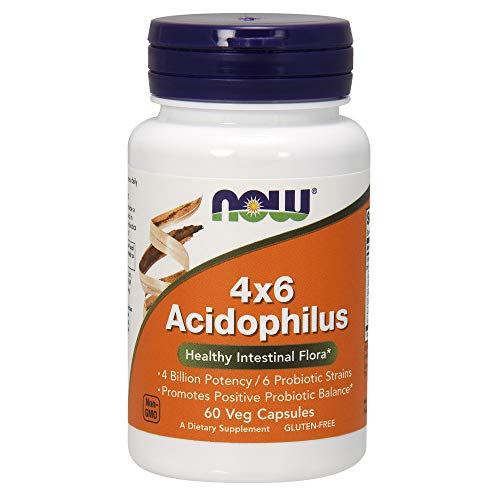 What Is Now Foods Acidophilus Supplement

These bacteria are necessary for the proper functioning of the gastrointestinal peristalsis. Acidophilus plays an important role in the substances and enzymes production, as well as in their proper absorption. The lactobacilli protect our body from germs and bacteria.

What Is Lactobacilli's Role In Our Bodies

The lactobacilli are powerful detoxifying agents. Dairy probiotics of this type help the lactose break down and thereby reduce the risk of gas and cramping, as well as bloating.

Acidophilus is ideal for the maintenance of healthy peristalsis and the immune system. It is particularly suitable for adolescents and adults. NOW® Foods Acidophilus has greater potency and a more balanced spectrum of beneficial bacteria. The product is not a medicament.

How to Take This Product

As a dietary supplement, take 1 capsule 1 to 2 times daily between meals or on an empty stomach. Keep refrigerated to maintain high potency. 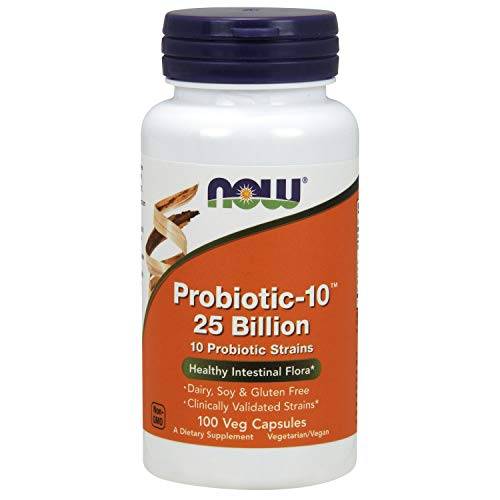 How Now Foods Probiotic 10 Product Will Help Me

NOW Foods Probiotic 10 offers a combination of ten types of beneficial intestinal bacteria. The formula contains fructooligosaccharides that support the healthy intestinal flora. The aim of this probiotics supplement is to maintain good digestion in a natural and healthy way.

The poor digestion is able to destroy the effect of your efforts for a healthy life, to cause discomfort and a general deterioration of health. This happens when the balance between the good (probiotic) and disease-producing organisms in the gastrointestinal tract is disturbed.

There are no unambiguous explanations of why and how the probiotic bacteria affect the activity of the stomach.

What Are the Benefits of Now Foods Probiotic 10

Take 1 capsule 1 to 2 times daily between meals or on an empty stomach. Keep refrigerated to maintain potency.

Useful Actions of the Probiotics

Probiotics Are Available as Dietary Supplements in the Following Forms

Prebiotics are defined as non-digestible food ingredients that affect our metabolism by selectively stimulating the growth and (or) the activity of certain bacteria in the large intestine (colon), and thus promoting the health.

To be effective, prebiotics must reach the colon without being digested in the upper digestive system, and once they reach it, they should be able to be utilized by specialized groups of microorganisms that are clearly pronounced and also improve the health state.

Nutrients that meet these criteria are several groups of oligosaccharides, and some of them are found in onions, chicory, and garlic, while others - in beans and peas, third ones - in milk, etc.

The listed below substances stimulate mainly the growth of bifidobacteria and because of that are called bifidogenic factors:

These refer to short-chain oligosaccharides, composed of glucose and fructose, contain from 3 to 5 monosaccharide residues and have an energy value of 6 KJ/g. FOSs are not toxic, carcinogenic or causing toxicological defects and are resistant to digestion in the upper gastrointestinal tract.

It should be borne in mind that FOSs act as a laxative with an averagely pronounced effect, although at higher doses there are complaints of accumulation of gasses (flatulence).

A study that had applied a controlled diet to volunteers has proven that FOSs, administered at a dose of 15 g/day, increase the number of bifidobacteria to 10 times, while simultaneously reducing the level of 7 different pathogenic bacteria in the large intestine.

The intake of soybeans (10g/day) leads to the same effect, but it is less pronounced.

The inulins belong to a group of natural fructose-containing oligosaccharides. They are prepared from the roots of the chicory and artichokes.

Inulins, which are offered as a dietary supplement, is composed of 10-12 fructose units and typically have glucose at the end of the chain. Inulins stimulate the growth of the Bifidobacterium species in the large intestine.

Isomaltooligosaccharides are the result of many enzymatic processes. They stimulate the growth of the Bifidobacterium and Lactobacillus species in the colon.

Isomaltooligosaccharides are sold in Japan and the US as a dietary supplement.

It is a semisynthetic disaccharide, which is decomposed by a limited number of bacteria in the colon.

Lactilol is a disaccharide similar to lactulose. Its primary application is in the treatment of constipation, but in Japan, it is used as a prebiotic.

It is not digested in the upper digestive tract and is fermented by a limited number of colonial bacteria. As a result, the amount of bifidobacteria and lactobacilli in the large intestine increases. In Europe, lactitol is used as a sweetener.

It is a trisaccharide, composed of galactose, fructose, and glucose.

Lactosucrose is obtained enzymatically and is not digested in the stomach and small intestine, but is digested by the intestinal bifidobacteria species and as a result their number in the colon increases.

They consist of a mixture of glucose-containing oligosaccharides that are obtained by hydrolysis of starch.

They are not digested in the upper digestive tract. They stimulate the multiplication of bifidobacteria in the colon. They are used as a dietary supplement.

They are found in soybeans and also in beans and peas. The two most famous ones are trisaccharide raffinose and stachyose.

The soy oligosaccharides stimulate the growth of bifidobacteria in the colon. They are sold as dietary supplements and functional food.

They are a mixture of oligosaccharides comprising glucose and galactose.

They are not digested in the upper digestive tract and stimulate the growth of bifidobacteria. They are sold as dietary supplements.

They are obtained by enzymatic hydrolysis of xylan polysaccharide and are constructed of oligosaccharides comprising from 2 to 4 linked xylose residues.

They are present mainly in humans and cow's milk and are obtained from the milk sugar lactose. Not all indigestible oligosaccharides have prebiotic properties.

Prebiotics may have anticancer, antimicrobial activity and influence the level of glucose in the blood. They increase the absorption of minerals, improve their balance and may have an anti-osteoporosis effect.

Prebiotics promote the growth of bifidobacteria and lactobacilli, and these bacteria, in turn, can bind with and inactivate certain substances causing cancer as well as to stop the growth of some tumors.

Some studies show a reduced risk of colon cancer after the consumption of fermented milk products and yogurt. However, there is still no compelling evidence that probiotics and prebiotics protect against colon cancer in humans.

How Can You Get Prebiotics

As on the Bulgarian market, it is extremely difficult to find nutritional supplements with prebiotics in their composition; we recommend you get them from their natural sources.

These are dietary supplements that contain both probiotics and prebiotics, with which their beneficial effect is amplified. The average content of proteins therein is 16-25%, carbohydrates - 40-60%, and fats - 20-30%.

Fortunately, in the stores for food supplements, you can now find a wide variety of synbiotics produced by domestic and foreign companies.

In the composition of these supplements, the various companies include additional substances and thus increase the benefits from the intake of synbiotics – the percentage body fat is decreased, the possibility of gaining muscle mass increases, the fatigue and stress is reduced, the calcium-phosphorus exchange is regulated, the damage in osteoporosis are regulated.

Moreover, synbiotics optimize the functions of the body in increased energy expense after heavy exercise in athletes, the synthesis of the bone substance is increased, and the locomotor system is stimulated.